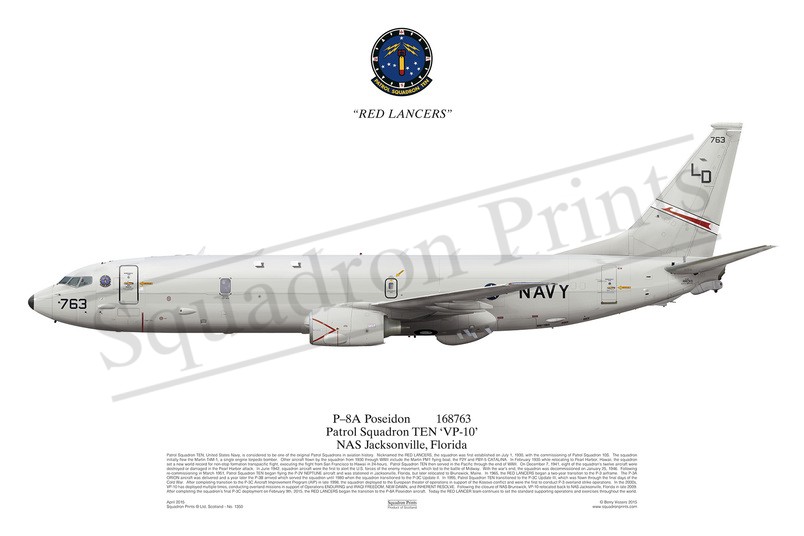 Squadron Prints Lithograph No. 1350 - P-8A Poseidon, 168763, Patrol Squadron TEN (VP-10), NAS Jacksonville, Florida. Patrol Squadron TEN, United States Navy, is considered to be one of the original Patrol Squadrons in aviation history. Nicknamed the RED LANCERS, the squadron was first established on July 1, 1930, with the commissioning of Patrol Squadron 10S. The squadron initially flew the Martin T4M-1, a single engine torpedo bomber. Other aircraft flown by the squadron from 1930 through WWII include the Martin PM1 flying boat, the P2Y and PBY-5 CATALINA. In February 1935 while relocating to Pearl Harbor, Hawaii, the squadron set a new world record for non-stop formation transpacific flight, executing the flight from San Francisco to Hawaii in 24-hours. Patrol Squadron TEN then served in the Pacific through the end of WWII. On December 7, 1941, eight of the squadron’s twelve aircraft were destroyed or damaged in the Pearl Harbor attack. In June 1942, squadron aircraft were the first to alert the U.S. forces of the enemy movement, which led to the battle of Midway. With the war’s end, the squadron was decommissioned on January 25, 1946. Following re-commissioning in March 1951, Patrol Squadron TEN began flying the P-2V NEPTUNE aircraft and was stationed in Jacksonville, Florida, but later relocated to Brunswick, Maine. In 1965, the RED LANCERS began a two-year transition to the P-3 airframe. The P-3A ORION aircraft was delivered and a year later the P-3B arrived which served the squadron until 1980 when the squadron transitioned to the P-3C Update II. In 1995, Patrol Squadron TEN transitioned to the P-3C Update III, which was flown through the final days of the Cold War. After completing transition to the P-3C Aircraft Improvement Program (AIP) in late 1998, the squadron deployed to the European theater of operations in support of the Kosovo conflict and were the first to conduct P-3 overland strike operations. In the 2000s, VP-10 has deployed multiple times, conducting overland missions in support of Operations ENDURING and IRAQI FREEDOM, NEW DAWN, and INHERENT RESOLVE. Following the closure of NAS Brunswick, VP-10 relocated back to NAS Jacksonville, Florida in late 2009. After completing the squadron’s final P-3C deployment on February 9th, 2015, the RED LANCERS began the transition to the P-8A Poseidon aircraft. Today the RED LANCER team continues to set the standard supporting operations and exercises throughout the world.