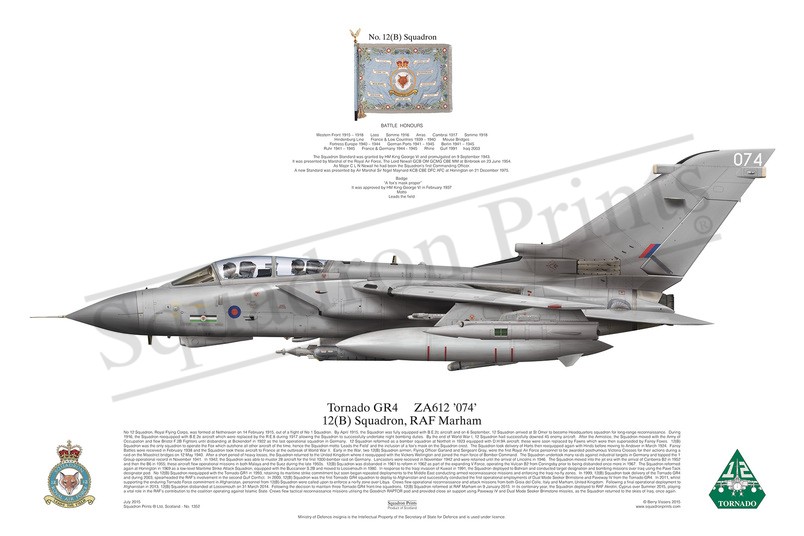 Squadron Prints Lithograph No. 1352 - Tornado GR4, ZA612 '074', 12(B) Squadron, RAF Marham. No 12 Squadron, Royal Flying Corps, was formed at Netheravon on 14 February 1915, out of a flight of No 1 Squadron. By April 1915, the Squadron was fully equipped with B.E.2c aircraft and on 6 September, 12 Squadron arrived at St Omer to become Headquarters squadron for long-range reconnaissance. During 1916, the Squadron reequipped with B.E.2e aircraft which were replaced by the R.E.8 during 1917 allowing the Squadron to successfully undertake night bombing duties. By the end of World War I, 12 Squadron had successfully downed 45 enemy aircraft. After the Armistice, the Squadron moved with the Army of Occupation and flew Bristol F.2B Fighters until disbanding at Bickendorf in 1922 as the last operational squadron in Germany. 12 Squadron reformed as a bomber squadron at Northolt in 1923 equipped with D.H.9A aircraft; these were soon replaced by Fawns which were then superseded by Fairey Foxes. 12(B) Squadron was the only squadron to operate the Fox which outshone all other aircraft of the time, hence the Squadron motto ‘Leads the Field’ and the inclusion of a fox’s mask on the Squadron crest. The Squadron took delivery of Harts then reequipped again with Hinds before moving to Andover in March 1924. Fairey Battles were received in February 1938 and the Squadron took these aircraft to France at the outbreak of World War II. Early in the War, two 12(B) Squadron airmen, Flying Officer Garland and Sergeant Gray, were the first Royal Air Force personnel to be awarded posthumous Victoria Crosses for their actions during a raid on the Maastrict bridges on 12 May 1940. After a short period of heavy losses, the Squadron returned to the United Kingdom where it reequipped with the Vickers Wellington and joined the main force of Bomber Command. The Squadron undertook many raids against industrial targets in Germany and topped the 1 Group operational record in November 1941. In 1942, the Squadron was able to muster 28 aircraft for the first 1000-bomber raid on Germany. Lancasters were received in November 1942 and were retained until the arrival of Lincolns in 1946. The Squadron moved into the jet era with the arrival of Canberra B2 in 1952 and then the B6 in 1955; these aircraft flew operational missions in both Malaya and the Suez during the late 1950s. 12(B) Squadron was disbanded in 1961 to reform in 1962 as part of the expanding V Force, operating the Vulcan B2 from Coningsby prior to being disbanded once more in 1967. The Squadron reformed again at Honington in 1969 as a low-level Maritime Strike Attack Squadron, equipped with the Buccaneer S.2B and moved to Lossiemouth in 1980. In response to the Iraqi invasion of Kuwait in 1991, the Squadron deployed to Bahrain and conducted target designation and bombing missions over Iraq using the Pave Tack designator pod. No 12(B) Squadron reequipped with the Tornado GR1 in 1993, retaining its maritime strike commitment but soon began repeated deployments to the Middle East conducting armed reconnaissance missions and enforcing the Iraqi no-fly zones. In 1999, 12(B) Squadron took delivery of the Tornado GR4 and during 2003, spearheaded the RAF’s involvement in the second Gulf Conflict. In 2009, 12(B) Squadron was the first Tornado GR4 squadron to deploy to Afghanistan and successfully conducted the first operational employments of Dual Mode Seeker Brimstone and Paveway IV from the Tornado GR4. In 2011, whilst supporting the enduring Tornado Force commitment in Afghanistan, personnel from 12(B) Squadron were called upon to enforce a no-fly zone over Libya. Crews flew operational reconnaissance and attack missions from both Gioia del Colle, Italy and Marham, United Kingdom. Following a final operational deployment to Afghanistan in 2013, 12(B) Squadron disbanded at Lossiemouth on 31 March 2014. Following the decision to maintain three Tornado GR4 front-line squadrons, 12(B) Squadron reformed at RAF Marham on 9 January 2015. In its centenary year, the Squadron deployed to RAF Akrotiri, Cyprus over Summer 2015, playing a vital role in the RAF’s contribution to the coalition operating against Islamic State. Crews flew tactical reconnaissance missions utilising the Goodrich RAPTOR pod and provided close air support using Paveway IV and Dual Mode Seeker Brimstone missiles, as the Squadron returned to the skies of Iraq, once again.