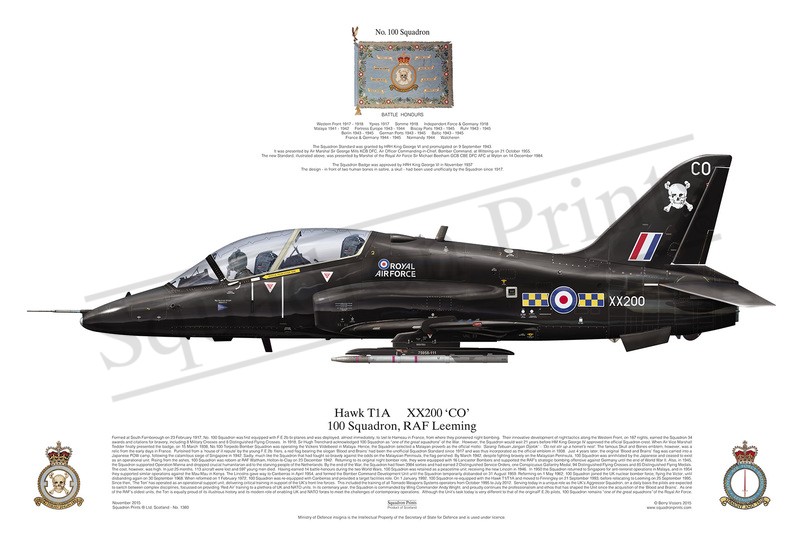 Squadron Prints Lithograph No. 1380 - Hawk T1A, XX200 'CO', 100 Squadron, RAF Leeming. Formed at South Farnborough on 23 February 1917, No. 100 Squadron was first equipped with F.E.2b bi-planes and was deployed, almost immediately, to Izel le Hameau in France, from where they pioneered night bombing. Their innovative development of night tactics along the Western Front, on 187 nights, earned the Squadron 34 awards and citations for bravery, including 8 Military Crosses and 8 Distinguished Flying Crosses. In 1918, Sir Hugh Trenchard acknowledged 100 Squadron as “one of the great squadrons” of the War. However, the Squadron would wait 21 years before HM King George IV approved the official Squadron crest. When Air Vice Marshall Tedder finally presented the badge, on 15 March 1938, No.100 Torpedo Bomber Squadron was operating the Vickers Vildebeest in Malaya. Hence, the Squadron selected a Malayan proverb as the official motto: ‘Sarang Tebuan Jangan Dijolok’ – ‘Do not stir up a hornet’s nest’. The famous Skull and Bones emblem, however, was a relic from the early days in France. Purloined from a ‘house of ill repute’ by the young F.E.2b fliers, a red flag bearing the slogan ‘Blood and Brains’ had been the unofficial Squadron Standard since 1917 and was thus incorporated as the official emblem in 1938. Just 4 years later, the original ‘Blood and Brains’ flag was carried into a Japanese POW camp, following the calamitous siege of Singapore in 1942. Sadly, much like the Squadron that had fought so bravely against the odds on the Malaysian Peninsula, the flag perished. By March 1942, despite fighting bravely on the Malaysian Peninsula, 100 Squadron was annihilated by the Japanese and ceased to exist as an operational unit. Rising from the ashes, 100 Squadron was reborn at RAF Waltham, Holton-le-Clay on 23 December 1942. Returning to its original night bomber role, they were equipped with 16 Lancaster Bombers and supported the RAF’s strategic bombing offensive against Germany until the end of World War II. Also, in 1945, the Squadron supported Operation Manna and dropped crucial humanitarian aid to the starving people of the Netherlands. By the end of the War, the Squadron had flown 3984 sorties and had earned 2 Distinguished Service Orders, one Conspicuous Gallantry Medal, 94 Distinguished Flying Crosses and 85 Distinguished Flying Medals. The cost, however, was high. In just 25 months, 113 aircraft were lost and 597 young men died. Having earned 14 battle-honours during the two World Wars, 100 Squadron was retained as a peacetime unit; receiving the new Lincoln in 1946. In 1950 the Squadron returned to Singapore for anti-terrorist operations in Malaya, and in 1954 they supported similar operations against the Mau-Mau in Kenya. The Lincolns gave way to Canberras in April 1954, and formed the Bomber Command Development Unit until the Squadron temporarily disbanded on 31 August 1959. Reforming on 1 May 1962, 100 Squadron joined the UK nuclear bomber force, flying the Victor, until disbanding again on 30 September 1968. When reformed on 1 February 1972, 100 Squadron was re-equipped with Canberras and provided a target facilities role. On 1 January 1992, 100 Squadron re-equipped with the Hawk T1/T1A and moved to Finningley on 21 September 1993, before relocating to Leeming on 25 September 1995. Since then, ‘The Ton’ has operated as an operational support unit, delivering critical training in support of the UK’s front line forces. This included the training of all Tornado Weapons Systems operators from October 1995 to July 2012. Serving today in a unique role as the UK’s Aggressor Squadron, on a daily basis the pilots are expected to switch between complex disciplines, focussed on providing ‘Red Air’ training to a plethora of UK and NATO units. In its centenary year, the Squadron is commanded by Wing Commander Andy Wright, and proudly continues the professionalism and ethos that has shaped the Unit since the acquisition of the ‘Blood and Brains’. As one of the RAF’s oldest units, the Ton is equally proud of its illustrious history and its modern role of enabling UK and NATO forces to meet the challenges of contemporary operations. Although the Unit’s task today is very different to that of the original F.E.2b pilots, 100 Squadron remains “one of the great squadrons” of the Royal Air Force.