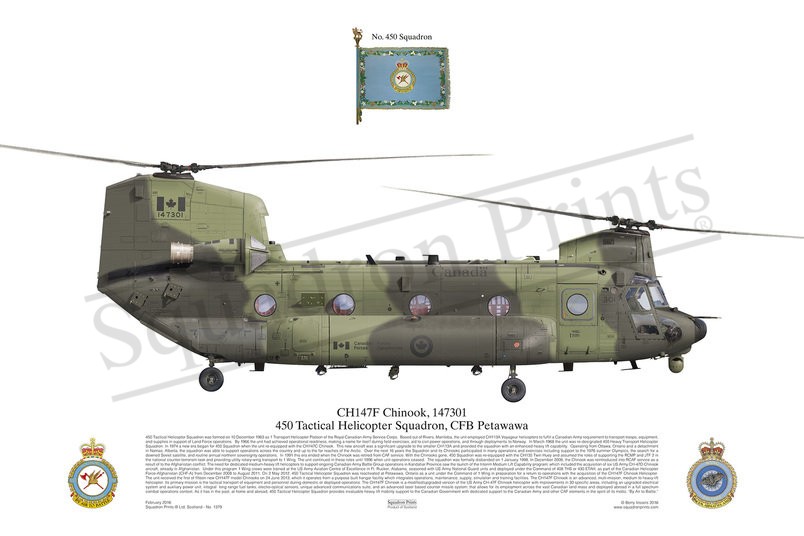 Squadron Prints Lithograph No. 1379 - 147301, CH-147F Chinook, 450 Tactical Helicopter Squadron, CFB Petawawa. 450 Tactical Helicopter Squadron was formed on 10 December 1963 as 1 Transport Helicopter Platoon of the Royal Canadian Army Service Corps. Based out of Rivers, Manitoba, the unit employed CH113A Voyageur helicopters to fulfill a Canadian Army requirement to transport troops, equipment, and supplies in support of Land Force operations. By 1966 the unit had achieved operational readiness, making a name for itself during field exercises, aid to civil power operations, and through deployments to Norway. In March 1968 the unit was re-designated 450 Heavy Transport Helicopter Squadron. In 1974 a new era began for 450 Squadron when the unit re-equipped with the CH147C Chinook. This new aircraft was a significant upgrade to the smaller CH113A and provided the squadron with an enhanced heavy lift capability. Operating from Ottawa, Ontario and a detachment in Namao, Alberta, the squadron was able to support operations across the country and up to the far reaches of the Arctic. Over the next 16 years the Squadron and its Chinooks participated in many operations and exercises including support to the 1976 summer Olympics, the search for a downed Soviet satellite, and routine annual northern sovereignty operations. In 1991 this era ended when the Chinook was retired from CAF service. With the Chinooks gone, 450 Squadron was re-equipped with the CH135 Twin Huey and assumed the roles of supporting the RCMP and JTF 2 in the national counter-terrorism task and providing utility rotary-wing transport to 1 Wing. The unit continued in these roles until 1996 when unit operations ceased. The squadron was formally disbanded on 1 January 1998. In December 2008, the Chinook was reintroduced into RCAF service as a result of to the Afghanistan conflict. The need for dedicated medium-heavy lift helicopters to support ongoing Canadian Army Battle Group operations in Kandahar Province saw the launch of the Interim Medium Lift Capability program; which included the acquisition of six US Army CH-47D Chinook aircraft, already in Afghanistan. Under this program 1 Wing crews were trained at the US Army Aviation Centre of Excellence in Ft. Rucker, Alabama, seasoned with US Army National Guard units and deployed under the Command of 408 THS or 430 ETAH, as part of the Canadian Helicopter Force-Afghanistan (CHF-A) from December 2008 to August 2011. On 2 May 2012, 450 Tactical Helicopter Squadron was reactivated at Petawawa, Ontario as a unit under the Command of 1 Wing in preparation for a return to operations with the acquisition of the CH147F Chinook Helicopter. The unit received the first of fifteen new CH147F model Chinooks on 24 June 2013, which it operates from a purpose built hangar facility which integrates operations, maintenance, supply, simulation and training facilities. The CH147F Chinook is an advanced, multi-mission, medium to heavy-lift helicopter. Its primary mission is the tactical transport of equipment and personnel during domestic or deployed operations. The CH147F Chinook is a modified/upgraded version of the US Army CH-47F Chinook helicopter with improvements in 30 specific areas, including an upgraded electrical system and auxiliary power unit, integral long range fuel tanks, electro-optical sensors, unique advanced communications suite, and an advanced laser based counter missile system; that allows for its employment across the vast Canadian land mass and deployed abroad in a full spectrum combat operations context. As it has in the past, at home and abroad, 450 Tactical Helicopter Squadron provides invaluable heavy lift mobility support to the Canadian Government with dedicated support to the Canadian Army and other CAF elements in the spirit of its motto, â€œBy Air to Battle.â€