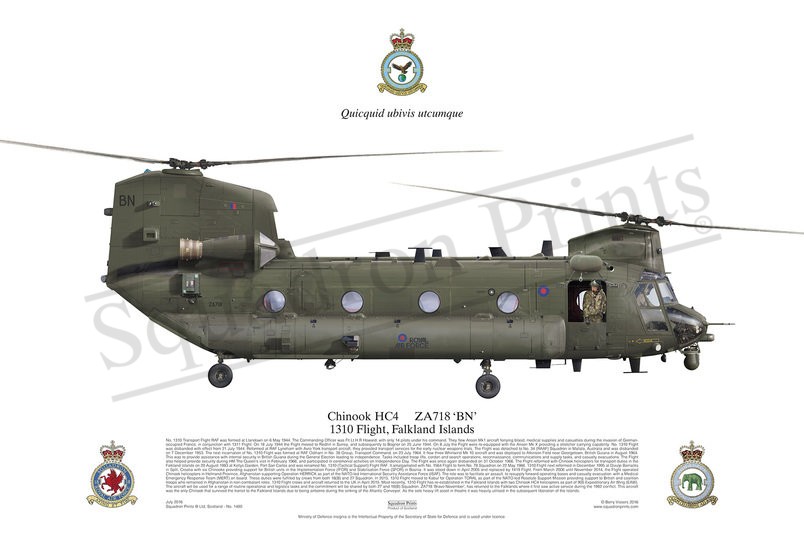 Squadron Prints Lithograph No. 1400 - ZA718 'BN', Chinook HC4, 1310 Flight, Falkland Islands. No. 1310 Transport Flight RAF was formed at Llandown on 6 May 1944. The Commanding Officer was Flt Lt H R Howard, with only 14 pilots under his command. They flew Anson Mk1 aircraft ferrying blood, medical supplies and casualties during the invasion of German-occupied France, in conjunction with 1311 Flight. On 18 July 1944 the Flight moved to Redhill in Surrey, and subsequently to Bognor on 25 June 1944. On 8 July the Flight were re-equipped with the Anson Mk X providing a stretcher carrying capability. No. 1310 Flight was disbanded with effect from 21 July 1944. Reformed at RAF Lyneham with Avro York transport aircraft, they provided transport services for the early nuclear weapons trials. The Flight was detached to No. 34 (RAAF) Squadron in Mallala, Australia and was disbanded on 7 December 1953. The next incarnation of No. 1310 Flight was formed at RAF Odiham in No. 38 Group, Transport Command, on 23 July 1964. It flew three Whirlwind Mk 10 aircraft and was deployed to Atkinson Field near Georgetown, British Guiana in August 1964. This was to provide assistance with internal security in British Guiana during the General Election leading to independence. Tasks included troop lifts, cordon and search operations, reconnaissance, communications and supply tasks, and casualty evacuations. The Flight also helped provide security during HM The Queenâ€™s visit in February 1966, and participated in ceremonial activities on Independence Day. The Flight was once again disbanded on 31 October 1966. The Flight reformed with Chinook helicopters for transport duties in the Falkland Islands on 20 August 1983 at Kellys Garden, Port San Carlos and was renamed No. 1310 (Tactical Support) Flight RAF. It amalgamated with No. 1564 Flight to form No. 78 Squadron on 22 May 1986. 1310 Flight next reformed in December 1995 at Divulje Barracks in Split, Croatia with six Chinooks providing support for British units in the Implementation Force (IFOR) and Stabilisation Force (SFOR) in Bosnia. It was stood down in April 2005 and replaced by 1419 Flight. From March 2006 until November 2014, the Flight operated Chinook helicopters in Helmand Province, Afghanistan supporting Operation HERRICK as part of the NATO-led International Security Assistance Force (ISAF). The role was to facilitate air assault, to resupply forward operating bases and casualty evacuation with a Medical Emergency Response Team (MERT) on board. These duties were fulfilled by crews from both 18(B) and 27 Squadron. In 2015, 1310 Flight moved to Kabul for Operation TORAL as part of the NATO-led Resolute Support Mission providing support to British and coalition troops who remained in Afghanistan in non-combatant roles. 1310 Flight crews and aircraft returned to the UK in April 2015. Most recently, 1310 Flight has re-established in the Falkland Islands with two Chinook HC4 helicopters as part of 905 Expeditionary Air Wing (EAW). The aircraft will be used for a range of routine operational and logistics tasks and the commitment will be shared by both 27 and 18(B) Squadron. ZA718 â€˜Bravo Novemberâ€™, has returned to the Falklands where it first saw active service during the 1982 conflict. This aircraft was the only Chinook that survived the transit to the Falkland Islands due to being airborne during the sinking of the Atlantic Conveyor. As the sole heavy lift asset in theatre it was heavily utilised in the subsequent liberation of the Islands.