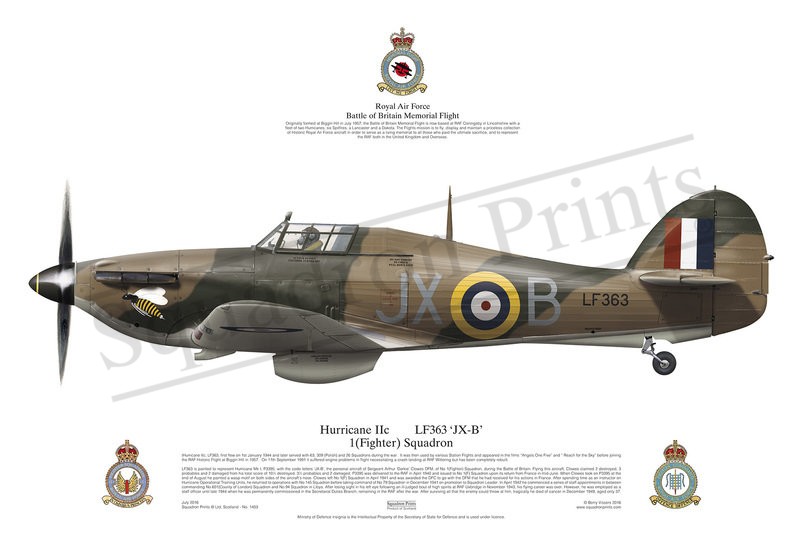 Squadron Prints Lithograph No. 1403 - LF363 'YB-W', Hurricane IIc, 1(Fighter) Squadron. Hurricane IIc, LF363, first flew on 1st January 1944 and later served with 63, 309 (Polish) and 26 Squadrons during the war. It was then used by various Station Flights and appeared in the films â€œAngels One Fiveâ€ and â€œ Reach for the Skyâ€ before joining the RAFâ€ˆHistoric Flight at Biggin Hill in 1957. On 11th September 1991 it suffered engine problems in flight necessitating a crash landing at RAF Wittering but has been completely rebuilt. LF363 is painted to represent Hurricane Mk I, P3395, with the code letters â€˜JX-Bâ€™, the personal aircraft of Sergeant Arthur â€˜Darkieâ€™ Clowes DFM, of No 1(Fighter) Squadron, during the Battle of Britain. Flying this aircraft, Clowes claimed 2 destroyed, 3 probables and 2 damaged from his total score of 10Â½ destroyed, 3Â½ probables and 2 damaged. P3395 was delivered to the RAF in April 1940 and issued to No 1(F) Squadron upon its return from France in mid-June. When Clowes took on P3395 at the end of August he painted a wasp motif on both sides of the aircraftâ€™s nose. Clowes left No 1(F) Squadron in April 1941 and was awarded the DFC to go with the DFM that he had received for his actions in France. After spending time as an instructor on Hurricane Operational Training Units, he returned to operations with No 145 Squadron before taking command of No 79 Squadron in December 1941 on promotion to Squadron Leader. In April 1942 he commenced a series of staff appointments in between commanding No 601(County of London) Squadron and No 94 Squadron in Libya. After losing sight in his left eye following an ill-judged bout of high spirits at RAF Uxbridge in November 1943, his flying career was over. However, he was employed as a staff officer until late 1944 when he was permanently commissioned in the Secretarial Duties Branch, remaining in the RAF after the war. After surviving all that the enemy could throw at him, tragically he died of cancer in December 1949, aged only 37.