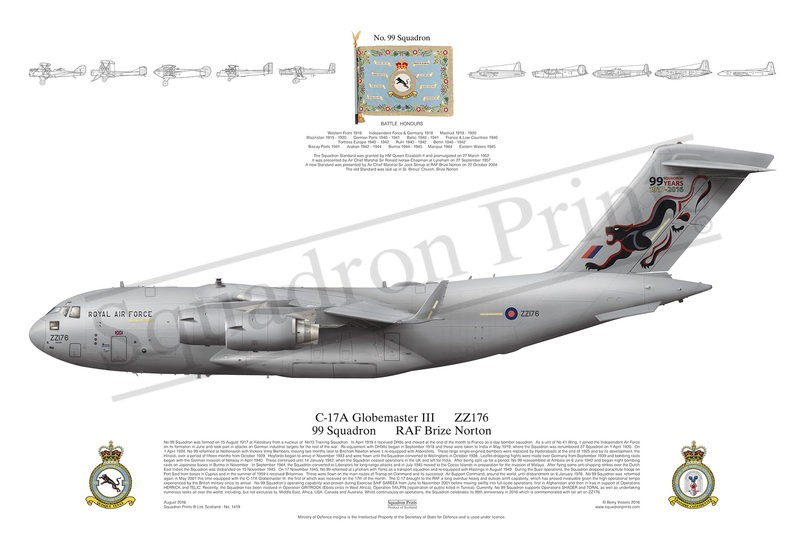 Squadron Prints Lithograph No. 1419 - ZZ176, C-17A Globemaster III, 99 Squadron, RAF Brize Norton. No 99 Squadron was formed on 15 August 1917 at Yatesbury from a nucleus of No13 Training Squadron. In April 1918 it received DH9s and moved at the end of the month to France as a day bomber squadron. As a unit of No 41 Wing, it joined the Independent Air Force on its formation in June and took part in attacks on German industrial targets for the rest of the war. Re-equipment with DH9As began in September 1918 and these were taken to India in May 1919, where the Squadron was renumbered 27 Squadron on 1 April 1920. On 1 April 1924, No 99 reformed at Netheravon with Vickers Vimy Bombers, moving two months later to Bircham Newton where it re-equipped with Aldershots. These large single-engined bombers were replaced by Hyderabads at the end of 1925 and by its development, the Hinaidi, over a period of fifteen months from October 1929. Heyfords began to arrive in November 1933 and were flown until the Squadron converted to Wellingtons in October 1938. Leaflet-dropping flights were made over Germany from September 1939 and bombing raids began with the German invasion of Norway in April 1940. These continued until 14 January 1942, when the Squadron ceased operations in the UK and left for India. After being split up for a period, No 99 reassembled at Ambala on 6 June 1942 and began night bombing raids on Japanese bases in Burma in November. In September 1944, the Squadron converted to Liberators for long-range attacks and in July 1945 moved to the Cocos Islands in preparation for the invasion of Malaya. After flying some anti-shipping strikes over the Dutch East Indies the Squadron was disbanded on 15 November 1945. On 17 November 1945, No 99 reformed at Lyneham with Yorks as a transport squadron and re-equipped with Hastings in August 1949. During the Suez operations, the Squadron dropped parachute troops on Port Said from bases in Cyprus and in the summer of 1959 it received Britannias. These were flown on the main routes of Transport Command and its successor, Air Support Command, around the world, until disbandment on 6 January 1976. No 99 Squadron was reformed again in May 2001 this time equipped with the C-17A Globemaster III, the first of which was received on the 17th of the month. The C-17 brought to the RAF a long overdue heavy and outsize airlift capability, which has proved invaluable given the high operational tempo experienced by the British military since its arrival. No 99 Squadronâ€™s operating capability was proven during Exercise SAIF SAREEA from June to November 2001 before moving swiftly into full-scale operations, first in Afghanistan and then in Iraq in support of Operations HERRICK and TELIC. Recently, the Squadron has been involved in Operation GRITROCK (Ebola crisis in West Africa), Operation TAILPIN (repatriation of public killed in Tunisia). Currently, No 99 Squadron supports Operations SHADER and TORAL as well as undertaking numerous tasks all over the world, including, but not exclusive to, Middle East, Africa, USA, Canada and Australia. Whilst continuously on operations, the Squadron celebrates its 99th anniversary in 2016 which is commemorated with tail art on ZZ176.