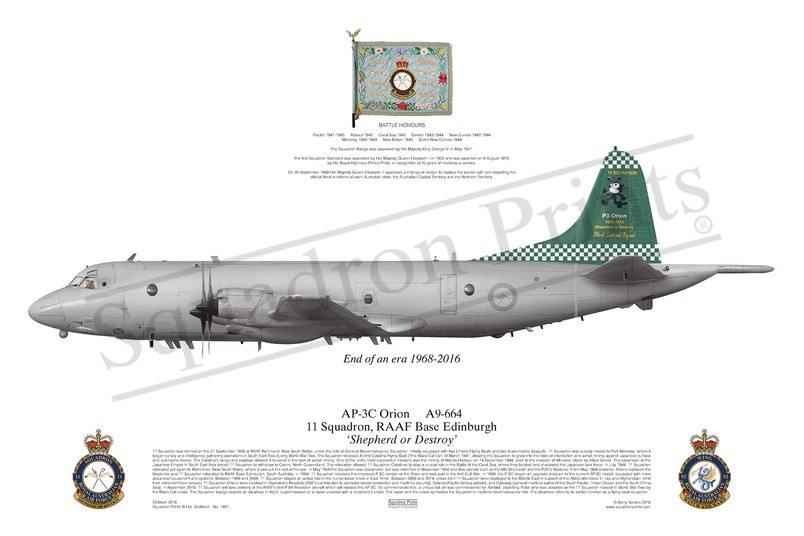 Squadron Prints Lithograph No. 1431 - A9-664, AP-3C Orion, 11 Squadron, RAAF Edinburgh. 11 Squadron was formed on the 21 September 1939 at RAAF Richmond, New South Wales, under the role of General Reconnaissance Squadron. Initially equipped with two Empire Flying Boats and two Supermarine Seagulls, 11 Squadron was quickly moved to Port Moresby, where it began survey and intelligence gathering operations in South East Asia during World War Two. The Squadron received its first Catalina Flying Boat (The Black Cat) on 19 March 1941, allowing the Squadron to grow into the roles of interdiction and aerial mining against Japanese surface and submarine forces. The Catalinaâ€™s range and payload allowed it to excel in the task of aerial mining. One of the unitâ€™s most successful missions was the mining of Manila Harbour on 14 December 1944, prior to the invasion of Mindora Island by Allied forces. The expansion of the Japanese Empire in South East Asia forced 11 Squadron to withdraw to Cairns, North Queensland. The relocation allowed 11 Squadron Catalinas to play a crucial role in the Battle of the Coral Sea, where they located and shadowed the Japanese task force. In July 1944, 11 Squadron relocated yet again to Rathmines, New South Wales, where it saw out the rest of the war. In May 1950 the Squadron was disbanded, but was reformed in November 1950 and flew aircraft such as the MK 30 Lincoln and the P2V-5 Neptune. From May 1968 onwards, Orions replaced the Neptunes and 11 Squadron relocated to RAAF Base Edinburgh, South Australia. In 1984, 11 Squadron received the improved P-3C version of the Orion and took part in the first Gulf War. In 1999, the P-3C began an upgrade program to the current AP-3C model, equipped with more advanced equipment and systems. Between 1999 and 2000, 11 Squadron played an active role in the humanitarian crisis in East Timor. Between 2003 and 2014, crews from 11 Squadron were deployed to the Middle East in support of the Allied offensives in Iraq and Afghanistan. Until their retirement from service, 11 Squadron Orions were involved in Operations Resolute (ADFâ€™s contribution to domestic border protection and maritime security), Solania (Pacific fishery patrols), and Gateway (general maritime patrol of the South Pacific, Indian Ocean and the South China Sea). In November 2016, 11 Squadron will take delivery of the RAAF's first P-8A Poseidon aircraft which will replace the AP-3C. To commemorate this, a unique tail art was commissioned for A9-664, depicting â€˜Felixâ€™ who was adopted as the 11 Squadron mascot in World War Two by the Black Cat crews. The Squadron badge depicts an albatross in flight, superimposed on a rapier crossed with a shepherdâ€™s crook. The rapier and the crook symbolise the Squadronâ€™s maritime reconnaissance role. The albatross refers to its earlier function as a flying boat squadron.