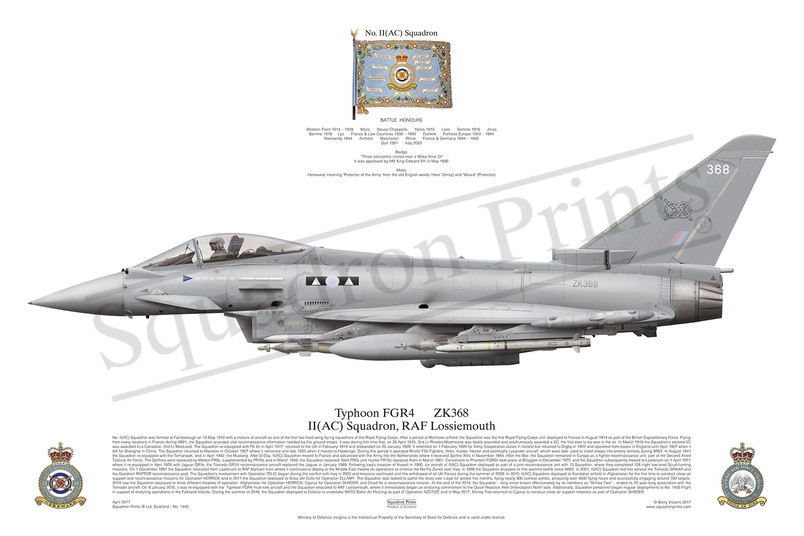 Squadron Prints Lithograph No. 1442 - ZK368, Typhoon FGR4, II(AC) Squadron, RAF Lossiemouth. No. II(AC) Squadron was formed at Farnborough on 13 May 1912 with a mixture of aircraft as one of the first two fixed-wing flying squadrons of the Royal Flying Corps. After a period at Montrose airfield, the Squadron was the first Royal Flying Corps unit deployed to France in August 1914 as part of the British Expeditionary Force. Flying from many locations in France during WW1, the Squadron provided vital reconnaissance information needed by the ground troops. It was during this time that, on 26 April 1915, 2nd Lt Rhodes-Moorhouse was fatally wounded and posthumously awarded a VC, the first ever to be won in the air. In March 1918 the Squadronâ€™s second VC was awarded to a Canadian, 2nd Lt MacLeod. The Squadron re-equipped with FK 8s in April 1917, returned to the UK in February 1919 and disbanded on 20 January 1920. It reformed on 1 February 1920 for Army Cooperation duties in Ireland but returned to Digby in 1922 and operated from bases in England until April 1927 when it left for Shanghai in China. The Squadron returned to Manston in October 1927 where it remained until late 1935 when it moved to Hawkinge. During this period it operated Bristol F2b Fighters, Atlas, Audax, Hector and eventually Lysander aircraft, which were later used to insert troops into enemy territory during WW2. In August 1941 the Squadron re-equipped with the Tomahawk, and in April 1942, the Mustang. After D-Day, II(AC) Squadron moved to France and advanced with the Army into the Netherlands where it received Spitfire XIVs in November 1944. After the War, the Squadron remained in Europe as a fighter-reconnaissance unit, part of the Second Allied Tactical Air Force. The Spitfires were replaced by Meteor FR9s, supplemented by PR10s and in March 1956, the Squadron received Swift FR5s until Hunter FR10s replaced them in March 1961. Conversion to Phantom FGR2s took place at BrÃ¼ggen in December 1970 and the Squadron subsequently moved to Laarbruch on 1 April 1971 where it re-equipped in April 1976 with Jaguar GR1s; the Tornado GR1A reconnaissance aircraft replaced the Jaguar in January 1989. Following lraqâ€™s invasion of Kuwait in 1990, six aircraft of II(AC) Squadron deployed as part of a joint reconnaissance unit with 13 Squadron, where they completed 128 night low-level Scud-hunting missions. On 1 December 1991 the Squadron relocated from Laarbruch to RAF Marham from where it continued to deploy to the Middle East theatre on operations to enforce the No-Fly Zones over Iraq; in 1999 the Squadron dropped its first wartime bomb since WW2. In 2001, II(AC) Squadron led into service the Tornado GR4/4A and the Goodrich RAPTOR reconnaissance pod. The Squadronâ€™s involvement with Operation TELIC began during the conflict with lraq in 2003 and missions continued until the withdrawal of all UK Forces during the summer of 2009. In 2010, II(AC) Squadron deployed to Kandahar airfield in Afghanistan for the first time to conduct close air support and reconnaissance missions for Operation HERRICK and in 2011 the Squadron deployed to Gioia del Colle for Operation ELLAMY. The Squadron was tasked to patrol the skies over Libya for almost five months, flying nearly 900 combat sorties, amassing over 4600 flying hours and successfully engaging around 700 targets. 2014 saw the Squadron deployed to three different theatres of operation: Afghanistan for Operation HERRICK; Cyprus for Operation SHADER; and Chad for a reconnaissance mission. At the end of the 2014, the Squadron â€“ long since known affectionately by its members as â€œShiney Twoâ€ â€“ ended its 25 year-long association with the Tornado aircraft. On 9 January 2015, it was re-equipped with the Typhoon FGR4 multi-role aircraft and the Squadron relocated to RAF Lossiemouth, where it immediately began an enduring commitment to the Quick Reaction Alert (Interceptor) North task. Additionally, Squadron personnel began regular deployments to No. 1435 Flight in support of enduring operations in the Falkland Islands. During the summer of 2016, the Squadron deployed to Estonia to undertake NATO Baltic Air Policing as part of Operation AZOTIZE and in May 2017, Shiney Two returned to Cyprus to conduct close air support missions as part of Operation SHADER.