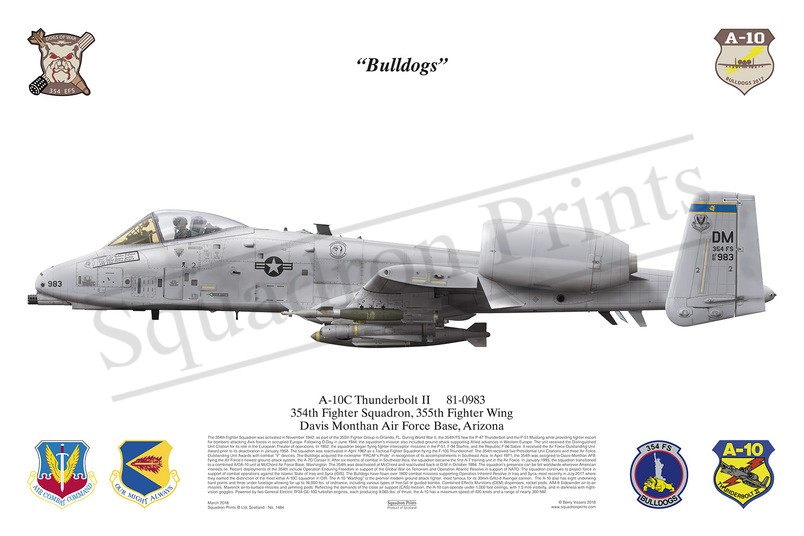 Squadron Prints Lithograph No. 1484 - 81-0983, A-10C Thunderbolt II, 354th Fighter Squadron, 355th Fighter Wing, Days Monthan AFB, Arizona. The 354th Fighter Squadron was activated in November 1942, as part of the 355th Fighter Group in Orlando, FL. During World War II, the 354th FS flew the P-47 Thunderbolt and the P-51 Mustang while providing fighter escort for bombers attacking Axis forces in occupied Europe. Following D-Day in June 1944, the squadronâ€™s mission also included ground attack supporting Allied advances in Western Europe. The unit received the Distinguished Unit Citation for its role in the European Theater of operations. In 1952, the squadron began flying fighter-interceptor missions in the P-51, F-94 Starfire, and the Republic F-86 Sabre. It received the Air Force Outstanding Unit Award prior to its deactivation in January 1958. The squadron was reactivated in April 1962 as a Tactical Fighter Squadron flying the F-105 Thunderchief. The 354th received five Presidential Unit Citations and three Air Force Outstanding Unit Awards with combat â€œVâ€ devices. The Bulldogs acquired the nickname â€œPACAFâ€™s Prideâ€ in recognition of its accomplishments in Southeast Asia. In April 1971, the 354th was assigned to Davis-Monthan AFB flying the Air Forceâ€™s newest ground attack system, the A-7D Corsair II. After six months of combat in Southeast Asia, the squadron became the first A-7 training unit in the Air Force. In January 1993, the squadron transitioned to a combined A/OA-10 unit at McChord Air Force Base, Washington. The 354th was deactivated at McChord and reactivated back at D-M in October 1994. The squadronâ€™s presence can be felt worldwide wherever American interests lie. Recent deployments of the 354th include Operation Enduring Freedom in support of the Global War on Terrorism and Operation Atlantic Resolve in support of NATO. The squadron continues to project force in support of combat operations against the Islamic State of Iraq and Syria (ISIS). The Bulldogs have flown over 1800 combat missions supporting Operation Inherent Resolve in Iraq and Syria, most recently in July 2017 where they earned the distinction of the most lethal A-10C squadron in OIR. The A-10 â€œWarthogâ€ is the premier modern ground attack fighter, most famous for its 30mm GAU-8 Avenger cannon. The A-10 also has eight underwing hard points and three under fuselage allowing for up to 16,000 lbs. of ordnance, including various types of free-fall or guided bombs, Combined Effects Munitions (CEM) dispensers, rocket pods, AIM-9 Sidewinder air-to-air missiles, Maverick air-to-surface missiles and jamming pods. Reflecting the demands of the close air support (CAS) mission, the A-10 can operate under 1,000 foot ceilings, with 1.5 mile visibility, and in darkness with night-vision goggles. Powered by two General Electric TF34-GE-100 turbofan engines, each producing 9,065 lbs. of thrust, the A-10 has a maximum speed of 420 knots and a range of nearly 300 NM.