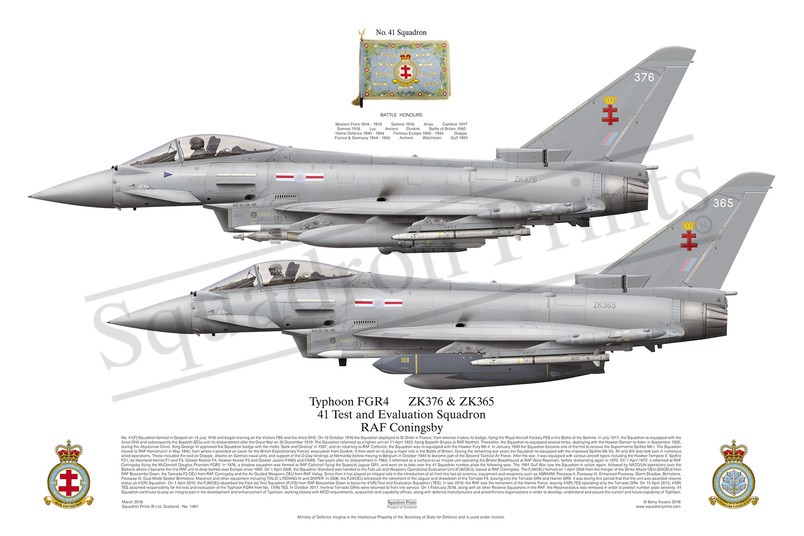 Squadron Prints Lithograph No. 1481 - ZK365, ZK376, Typhoon FGR4, 41 Test and Evaluation Squadron, RAF Coningsby. No. 41(F) Squadron formed in Gosport on 14 July 1916 and began training on the Vickers FB5 and the Airco DH2. On 15 October 1916 the Squadron deployed to St Omer in France, from whence it takes its badge, flying the Royal Aircraft Factory FE8 in the Battle of the Somme. In July 1917, the Squadron re-equipped with the Airco DH5 and subsequently the Sopwith SE5a until its disbandment after the Great War on 30 December 1919. The Squadron reformed as a fighter unit on 11 April 1923, flying Sopwith Snipes at RAF Northolt. Thereafter, the Squadron re-equipped several times, deploying with the Hawker Demon to Aden in September 1935, during the Abyssinian Crisis. King George VI approved the Squadron badge with the motto â€˜Seek and Destroyâ€™ in 1937, and on returning to RAF Catterick, the Squadron was re-equipped with the Hawker Fury Mk II. In January 1939 the Squadron became one of the first to receive the Supermarine Spitfire Mk I. The Squadron moved to RAF Hornchurch in May 1940, from where it provided air cover for the British Expeditionary Forcesâ€™ evacuation from Dunkirk. It then went on to play a major role in the Battle of Britain. During the remaining war years the Squadron re-equipped with the improved Spitfire Mk Vb, XII and XIV and took part in numerous allied operations. These included the raid on Dieppe, attacks on German naval units and support of the D-Day landings at Normandy before moving to Belgium in October 1944 to become part of the Second Tactical Air Force. After the war, it was equipped with various aircraft types including the Hawker Tempest V, Spitfire F21, de Havilland Hornet F1 and F3, Gloster Meteor F4, Hawker Hunter F5 and Gloster Javelin FAW5 and FAW8. Two years after its disbandment in 1963, it reformed as a surface-to-air missile unit operating the Bristol Bloodhound at RAF West Raynham, before disbanding again in 1970. On 1 April 1972, it reformed at RAF Coningsby flying the McDonnell Douglas Phantom FGR2. In 1976, a shadow squadron was formed at RAF Coltishall flying the Sepecat Jaguar GR1, and went on to take over the 41 Squadron number plate the following year. The 1991 Gulf War saw the Squadron in action again, followed by NATO/UN operations over the Balkans where it became the first RAF unit to drop bombs over Europe since 1945. On 1 April 2006, the Squadron Standard was handed to the Fast Jet and Weapons Operational Evaluation Unit (FJWOEU), based at RAF Coningsby. The FJWOEU formed on 1 April 2004 from the merger of the Strike Attack OEU (SAOEU) from RAF Boscombe Down, the Tornado F3 OEU from RAF Coningsby and the Air Guided Weapons OEU from RAF Valley. Since then it has played an integral role in the introduction of all front line fast jet avionics, equipment and weaponry such as ASRAAM, Paveway II, Paveway III, Enhanced Paveway, Storm Shadow, Brimstone, Paveway IV, Dual Mode Seeker Brimstone, Maverick and other equipment including TIALD, LITENING III and SNIPER. In 2006, the FJWOEU witnessed the retirement of the Jaguar and drawdown of the Tornado F3, leaving only the Tornado GR4 and Harrier GR9. It was during this period that that the unit was awarded reserve status as 41(R) Squadron. On 1 April 2010, the FJWOEU absorbed the Fast Jet Test Squadron (FJTS) from RAF Boscombe Down to become 41(R) Test and Evaluation Squadron (TES). In late 2010, the RAF saw the retirement of the Harrier Force, leaving 41(R) TES operating only the Tornado GR4. On 15 April 2013, 41(R) TES assumed responsibility for the test and evaluation of the Typhoon FGR4 from No. 17(R) TES. In October 2017, the final Tornado GR4s were returned to front line service. On 1 February 2018, along with all other Reserve Squadrons in the RAF, the Reserve status was removed in order to protect number plate seniority. 41 Squadron continues to play an integral part in the development and enhancement of Typhoon; working closely with MOD requirements, acquisition and capability offices, along with defence manufacturers and airworthiness organisations in order to develop, understand and assure the current and future capability of Typhoon.