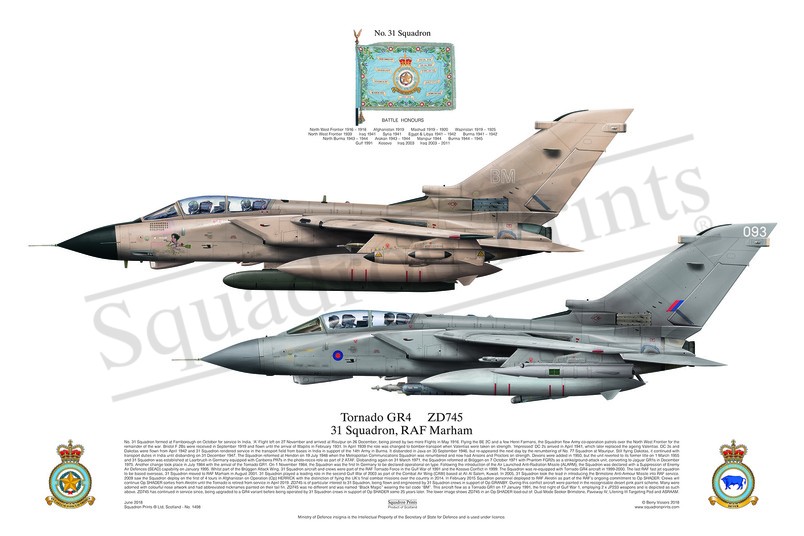 Squadron Prints Lithograph No. 1498 - Tornado GR4, ZD745, 31 Squadron, RAF Marham. No. 31 Squadron formed at Farnborough on October for service In India. â€˜Aâ€™ Flight left on 27 November and arrived at Risulpur on 26 December, being joined by two more Flights in May 1916. Flying the BE 2C and a few Henri Farmans, the Squadron flew Army co-operation patrols over the North West Frontier for the remainder of the war. Bristol F 2Bs were received in September 1919 and flown until the arrival of Wapitis in February 1931. In April 1939 the role was changed to bomber-transport when Valentias were taken on strength. â€˜Impressedâ€™ DC 2s arrived in April 1941, which later replaced the ageing Valentias. DC 3s and Dakotas were flown from April 1942 and 31 Squadron rendered service in the transport field from bases in India in support of the 14th Army in Burma. It disbanded in Java on 30 September 1946, but re-appeared the next day by the renumbering of No. 77 Squadron at Mauripur. Still flying Dakotas, it continued with transport duties in India until disbanding on 31 December 1947. The Squadron reformed at Hendon on 19 July 1948 when the Metropolitan Communications Squadron was renumbered and now had Ansons and Proctors on strength. Devons were added in 1950, but the unit reverted to its former title on 1 March 1955 and 31 Squadron was established at Laarbruch in Germany equipped with Canberra PR7s in the photo-recce role as part of 2 ATAF. Disbanding again on 31 March 1971, the Squadron reformed at BrÃ¼ggen on 7 October 1971 with Phantom FGR2s as a strike/ground-attack unit, converting to Jaguar GR1s in December 1975. Another change took place in July 1984 with the arrival of the Tornado GR1. On 1 November 1984, the Squadron was the first In Germany to be declared operational on type. Following the introduction of the Air Launched Anti-Radiation Missile (ALARM), the Squadron was declared with a Suppression of Enemy Air Defences (SEAD) capability on January 1995. Whilst part of the BrÃ¼ggen Attack Wing, 31 Squadron aircraft and crews were part of the RAF Tornado Force in the Gulf War of 1991 and the Kosovo Conflict in 1999. The Squadron was re-equipped with Tornado GR4 aircraft in 1999-2000. The last RAF fast jet squadron to be based overseas, 31 Squadron moved to RAF Marham in August 2001. 31 Squadron played a leading role in the second Gulf War of 2003 as part of the Combat Air Wing (CAW) based at Ali Al Salem, Kuwait. In 2005, 31 Squadron took the lead in introducing the Brimstone Anti-Armour Missile into RAF service. 2009 saw the Squadron deploy on the first of 4 tours in Afghanistan on Operation (Op) HERRICK with the distinction of flying the UKâ€™s final combat missions over the country in 2014. In February 2015 Squadron personnel deployed to RAF Akrotiri as part of the RAFâ€™s ongoing commitment to Op SHADER. Crews will continue Op SHADER sorties from Akrotiri until the Tornado is retired from service in April 2019. ZD745 is of particular interest to 31 Squadron, being flown and engineered by 31 Squadron crews in support of Op GRANBY. During this conflict aircraft were painted in the recognisable desert pink paint scheme. Many were adorned with colourful nose artwork and had abbreviated nicknames painted on their tail fin. ZD745 was no different and was named â€œBlack Magicâ€ wearing the tail code â€œBMâ€. This aircraft flew as a Tornado GR1 on 17 January 1991, the first night of Gulf War 1, employing 2 x JP233 weapons and is depicted as such above. ZD745 has continued in service since, being upgraded to a GR4 variant before being operated by 31 Squadron crews in support of Op SHADER some 25 years later. The lower image shows ZD745 in an Op SHADER load-out of: Dual Mode Seeker Brimstone, Paveway IV, Litening III Targeting Pod and ASRAAM.