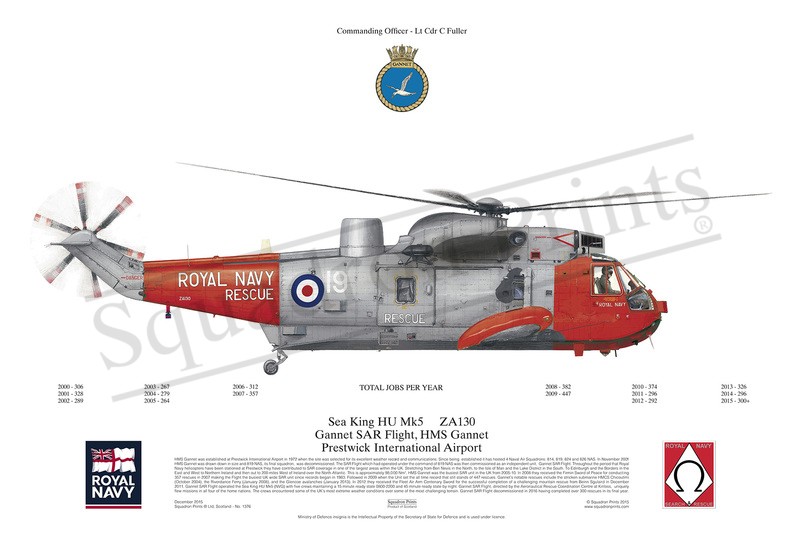 Squadron Prints Lithograph No. 1376 - Seak King HU5, ZA130 '019', Gannet SAR Flight, HMS Gannet, Prestwick International Airport. HMS Gannet was established at Prestwick International Airport in 1972 when the site was selected for its excellent weather record and communications. Since being established it has hosted 4 Naval Air Squadrons: 814, 819, 824 and 826 NAS. In November 2001 HMS Gannet was drawn down in size and 819 NAS, its final squadron, was decommissioned. The SAR Flight which had operated under the command of 819 NAS was then commissioned as an independent unit, Gannet SAR Flight. Throughout the period that Royal Navy helicopters have been stationed at Prestwick they have contributed to SAR coverage in one of the largest areas within the UK. Stretching from Ben Nevis in the North, to the Isle of Man and the Lake District in the South. To Edinburgh and the Borders in the East and West to Northern Ireland and then out to 200 miles West of Ireland over the North Atlantic. This is approximately 98,000 Nm². HMS Gannet was the busiest SAR unit in the UK from 2005-10. In 2008 they received the Firmin Sword of Peace for conducting 357 rescues in 2007 making the Flight the busiest UK wide SAR unit since records began in 1983. Followed in 2009 when the Unit set the all time record that still stands of 447 rescues. Gannet’s notable rescues include the stricken submarine HMCS Chicoutimi (October 2004), the Riverdance Ferry (January 2008), and the Glencoe avalanches (January 2013). In 2012 they received the Fleet Air Arm Centenary Sword for the successful completion of a challenging mountain rescue from Beinn Sgulaird in December 2011. Gannet SAR Flight operated the Sea King HU Mk5 (NVG) with five crews maintaining a 15 minute ready state 0800-2200 and 45 minute ready state by night. Gannet SAR Flight, directed by the Aeronautical Rescue Coordination Centre at Kinloss, uniquely flew missions in all four of the home nations. The crews encountered some of the UK’s most extreme weather conditions over some of the most challenging terrain. Gannet SAR Flight decommissioned in 2016 having completed over 300 rescues in its final year.