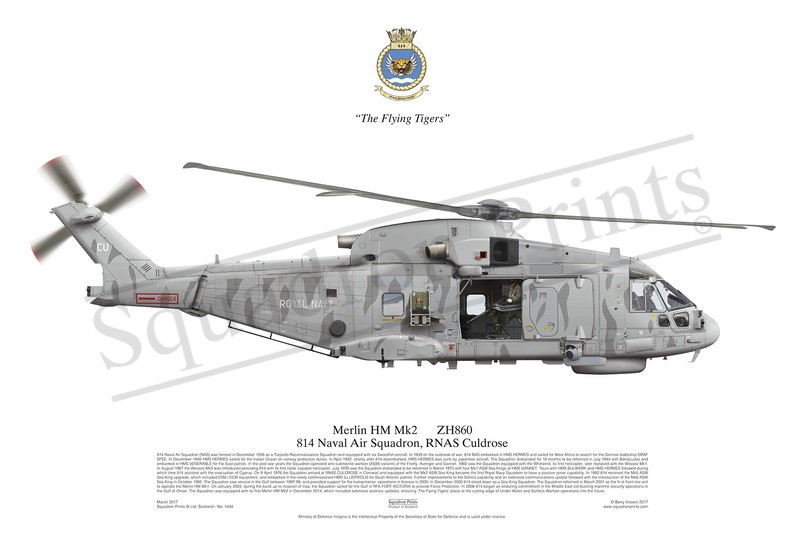 Squadron Prints Lithograph No. 1434 - ZH860, Merlin HM Mk2, 814 Naval Air Squadron, RNAS Culdrose. 814 Naval Air Squadron (NAS) was formed in December 1938 as a Torpedo Reconnaissance Squadron and equipped with six Swordfish aircraft. In 1939 on the outbreak of war, 814 NAS embarked in HMS HERMES and sailed for West Africa to search for the German battleship GRAF SPEE. In December 1940 HMS HERMES sailed for the Indian Ocean on convoy protection duties. In April 1942, shortly after 814 disembarked, HMS HERMES was sunk by Japanese aircraft. The Squadron disbanded for 18 months to be reformed in July 1944 with Barracudas and embarked in HMS VENERABLE for Far East patrols. In the post war years the Squadron operated anti-submarine warfare (ASW) variants of the Firefly, Avenger and Gannet. 1960 saw the Squadron equipped with the Whirlwind, its first helicopter, later replaced with the Wessex Mk1. In August 1967 the Wessex Mk3 was introduced providing 814 with its first radar capable helicopter. July 1970 saw the Squadron disbanded to be reformed in March 1973 with four Mk1 ASW Sea Kings at HMS GANNET. Tours with HMS BULWARK and HMS HERMES followed during which time 814 assisted with the evacuation of Cyprus. On 9 April 1976 the Squadron arrived at RNAS CULDROSE in Cornwall and equipped with the Mk2 ASW Sea King became the first Royal Navy Squadron to have a passive sonar capability. In 1982 814 received the Mk5 ASW Sea King upgrade, which included ESM / ECM equipment, and embarked in the newly commissioned HMS ILLUSTRIOUS for South Atlantic patrols. Further improvements to the Sonics capability and an extensive communications update followed with the introduction of the Mk6 ASW Sea King in October 1992. The Squadron saw service in the Gulf between 1997-99, and provided support for the humanitarian operations in Kosovo in 2000. In December 2000 814 stood down as a Sea King Squadron. The Squadron reformed in March 2001 as the first front-line unit to operate the Merlin HM Mk1. On January 2003, during the build up to invasion of Iraq, the Squadron sailed for the Gulf in RFA FORT VICTORIA to provide Force Protection. In 2006 814 began an enduring commitment in the Middle East conducting maritime security operations in the Gulf of Oman. The Squadron was equipped with its first Merlin HM Mk2 in December 2014, which included extensive avionics updates, ensuring â€˜The Flying Tigersâ€™ place at the cutting edge of Under Water and Surface Warfare operations into the future.