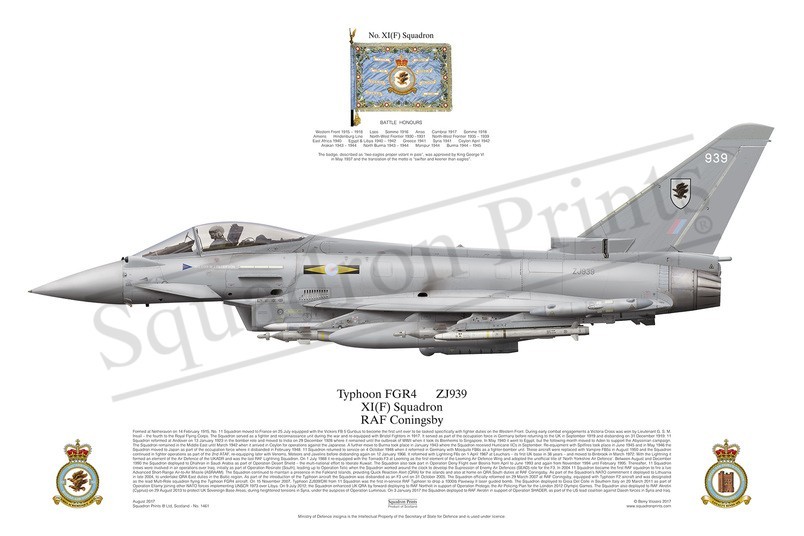 Squadron Prints Lithograph No. 1461 - ZJ939, Typhoon FGR4, XI(F) Squadron, RAF Coningsby. Formed at Netheravon on 14 February 1915, No. 11 Squadron moved to France on 25 July equipped with the Vickers FB 5 Gunbus to become the first unit ever to be tasked specifically with fighter duties on the Western Front. During early combat engagements a Victoria Cross was won by Lieutenant G. S. M. Insall â€“ the fourth to the Royal Flying Corps. The Squadron served as a fighter and reconnaissance unit during the war and re-equipped with Bristol Fighters in 1917. It served as part of the occupation force in Germany before returning to the UK in September 1919 and disbanding on 31 December 1919. 11 Squadron reformed at Andover on 13 January 1923 in the bomber role and moved to India on 29 December 1928 where it remained until the outbreak of WWII when it took its Blenheims to Singapore. In May 1940 it went to Egypt, but the following month moved to Aden to support the Abyssinian campaign. The Squadron remained in the Middle East until March 1942 when it arrived in Ceylon for operations against the Japanese. A further move to Burma took place in January 1943 where the Squadron received Hurricane IICs in September. Re-equipment with Spitfires took place in June 1945 and in May 1946 the Squadron moved to Japan as part of the occupation force where it disbanded in February 1948. 11 Squadron returned to service on 4 October 1948 when it reformed in Germany with Mosquito FB6s as a fighter-bomber unit. These aircraft were replaced with Vampire FB5s in August 1950 and the Squadron continued in fighter operations as part of the 2nd ATAF, re-equipping later with Venoms, Meteors and Javelins before disbanding again on 12 January 1966. It reformed with Lightning F6s on 1 April 1967 at Leuchars â€“ its first UK base in 38 years â€“ and moved to Binbrook in March 1972. With the Lightning it formed an element of the Air Defence of the UKADR and was the last RAF Lightning Squadron. On 1 July 1988 it re-equipped with the Tornado F3 at Leeming as the first element of the Leeming Air Defence Wing and adopted the unofficial title of â€˜North Yorkshire Air Defenceâ€™. Between August and December 1990 the Squadron deployed to Dhahran in Saudi Arabia as part of Operation Desert Shield â€“ the multi-national effort to liberate Kuwait. The Squadron also took part in Operation Deny Flight over Bosnia from April to June 1993 and again from November 1994 until February 1995. Thereafter, 11 Squadron crews were involved in air operations over Iraq, initially as part of Operation Resinate (South), leading up to Operation Telic when the Squadron worked around the clock to develop the Supression of Enemy Air Defences (SEAD) role for the F3. In 2004 11 Squadron became the first RAF squadron to fire a live Advanced Short-Range Air-to-Air Missile (ASRAAM). The Squadron continued to maintain a presence in the Falkland Islands, providing Quick Reaction Alert (QRA) for the islands and also at home on QRA South duties at RAF Coningsby. As part of the Squadronâ€™s NATO commitment it deployed to Lithuania in late 2004, to undertake QRA East duties in the Baltic region. As part of the introduction of the Typhoon aircraft the Squadron was disbanded as an F3 unit on 31 October 2005. The Squadron officially reformed on 29 March 2007 at RAF Coningsby, equipped with Typhoon F2 aircraft and was designated as the lead Multi-Role squadron flying the Typhoon FGR4 aircraft. On 15 November 2007, Typhoon ZJ939/DXI from 11 Squadron was the first in-service RAF Typhoon to drop a 1000lb Paveway II laser guided bomb. The Squadron deployed to Gioia Del Colle in Southern Italy on 20 March 2011 as part of Operation Ellamy joining other NATO forces implementing UNSCR 1973 over Libya. On 9 July 2012, the Squadron enhanced UK QRA by forward deploying to RAF Northolt in support of Operation Protego; the Air Policing Plan for the London 2012 Olympic Games. The Squadron also deployed to RAF Akrotiri (Cyprus) on 29 August 2013 to protect UK Sovereign Base Areas, during heightened tensions in Syria, under the auspices of Operation Luminous. On 3 January 2017 the Squadron deployed to RAF Akrotiri in support of Operation SHADER, as part of the US lead coalition against Daesh forces in Syria and Iraq.