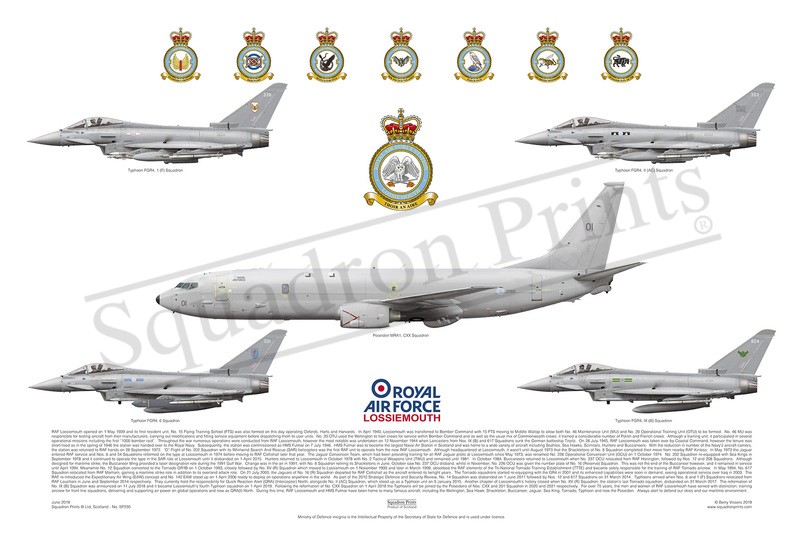 Squadron Prints Lithograph No. SP230 - Royal Air Force Lossiemouth. RAF Lossiemouth opened on 1 May 1939 and its first resident unit, No. 15 Flying Training School (FTS) was also formed on this day operating Oxfords, Harts and Harvards. In April 1940, Lossiemouth was transferred to Bomber Command with 15 FTS moving to Middle Wallop to allow both No. 46 Maintenance Unit (MU) and No. 20 Operational Training Unit (OTU) to be formed. No. 46 MU was responsible for testing aircraft from their manufacturers, carrying out modifications and fitting service equipment before dispatching them to user units. No. 20 OTU used the Wellington to train crews for service within Bomber Command and as well as the usual mix of Commonwealth crews, it trained a considerable number of Polish and French crews. Although a training unit, it participated in several operational missions including the first â€œ1000 bomber raidâ€. Throughout the war numerous operations were conducted from RAF Lossiemouth, however the most notable was undertaken on 12 November 1944 when Lancasters from Nos. IX (B) and 617 Squadrons sunk the German battleship Tirpitz. On 28 July 1945, RAF Lossiemouth was taken over by Coastal Command, however the tenure was short-lived as in the spring of 1946 the station was handed over to the Royal Navy. Subsequently, the station was commissioned as HMS Fulmar on 7 July 1946. HMS Fulmar was to become the largest Naval Air Station in Scotland and was home to a wide variety of aircraft including Seafires, Sea Hawks, Scimitars, Hunters and Buccaneers. With the reduction in number of the Navyâ€™s aircraft carriers, the station was returned to RAF hands on 28 September 1972. â€œDâ€ Flight of No. 202 Squadron with its Whirlwind Search And Rescue (SAR) helicopters was the first RAF unit to operate from the new RAF Lossiemouth. Although headquartered at Lossiemouth, it wasnâ€™t until August 1973 that the Shackletons of No. 8 Squadron completed their move from nearby RAF Kinloss. In May 1973 the Jaguar entered RAF service and Nos. 6 and 54 Squadrons reformed on the type at Lossiemouth in 1974 before moving to RAF Coltishall later that year. The Jaguar Conversion Team, which had been providing training for all RAF Jaguar pilots at Lossiemouth since May 1973, was renamed No. 226 Operational Conversion Unit (OCU) on 1 October 1974. No. 202 Squadron re-equipped with Sea Kings in September 1978 and it continued to operate the type in the SAR role at Lossiemouth until it disbanded on 1 April 2015. Hunters returned to Lossiemouth in October 1978 with No. 2 Tactical Weapons Unit (TWU) and remained until 1981. In October 1984, Buccaneers returned to Lossiemouth when No. 237 OCU relocated from RAF Honington, followed by Nos. 12 and 208 Squadrons. Although designed for maritime strike, the Buccaneer Wing provided a laser designation role during the 1991 Gulf War. Change was in the air in 1991, with No. 8 Squadron retiring its Shackletons in June, October saw No. 237 OCU disband, whilst in November, No. 226 OCU was given the number plate of No. 16 (Reserve) Squadron. This was not the end of the Buccaneer however, and it remained in service until April 1994. Meanwhile No. 12 Squadron converted to the Tornado GR1B on 1 October 1993, closely followed by No. XV (R) Squadron which moved to Lossiemouth on 1 November 1993 and later in March 1999, absorbed the RAF elements of the Tri-National Tornado Training Establishment (TTTE) and became solely responsible for the training of RAF Tornado aircrew. In May 1994, No. 617 Squadron relocated from RAF Marham, gaining a maritime strike role in addition to its overland attack role. On 21 July 2000, the Jaguars of No. 16 (R) Squadron departed for RAF Coltishall as the aircraft entered its twilight years. The Tornado squadrons started re-equipping with the GR4 in 2001 and its enhanced capabilities were soon in demand, seeing operational service over Iraq in 2003. The RAF re-introduced the Expeditionary Air Wing (EAW) concept and No. 140 EAW stood up on 1 April 2006 ready to deploy on operations anywhere in the world. As part of the 2010 Strategic Defence and Security Review, No. 14 Squadron was disbanded on 1 June 2011 followed by Nos. 12 and 617 Squadrons on 31 March 2014. Typhoons arrived when Nos. 6 and 1 (F) Squadrons relocated from RAF Leuchars in June and September 2014 respectively. They currently hold the responsibility for Quick Reaction Alert (QRA) (Interceptor) North, alongside No. II (AC) Squadron, which stood up as a Typhoon unit on 9 January 2015. Another chapter of Lossiemouthâ€™s history closed when No. XV (R) Squadron, the stationâ€™s last Tornado squadron, disbanded on 31 March 2017. The reformation of No. IX (B) Squadron was announced on 11 July 2018 and it became Lossiemouthâ€™s fourth Typhoon squadron on 1 April 2019. Following the reformation of No. CXX Squadron on 1 April 2018 the Typhoons will be joined by the Poseidons of Nos. CXX and 201 Squadron in 2020 and 2021 respectively. For over 75 years, the men and women of RAF Lossiemouth have served with distinction; training aircrew for front line squadrons, delivering and supporting air power on global operations and now as QRA(I) North. During this time, RAF Lossiemouth and HMS Fulmar have been home to many famous aircraft, including the Wellington, Sea Hawk, Shackleton, Buccaneer, Jaguar, Sea King, Tornado, Typhoon and now the Poseidon. Always alert to defend our skies and our maritime environment.