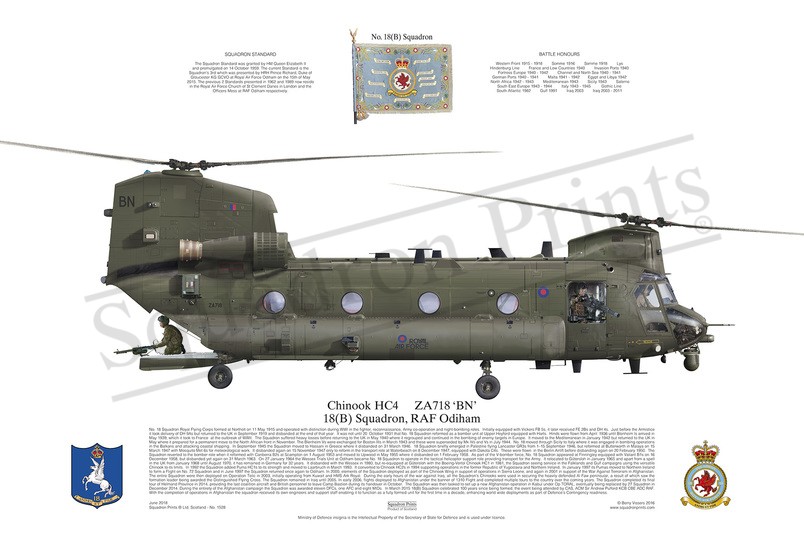 Squadron Prints Lithograph No. 1528 - Chinook HC4, ZA718 'BN', 18(B) Squadron, RAF Odiham. No. 18 Squadron Royal Flying Corps formed at Northolt on 11 May 1915 and operated with distinction during WWI in the fighter, reconnaissance, Army co-operation and night-bombing roles. Initially equipped with Vickers FB 5s, it later received FE 2Bs and DH 4s. Just before the Armistice it took delivery of DH 9As but returned to the UK in September 1919 and disbanded at the end of that year. It was not until 20 October 1931 that No. 18 Squadron reformed as a bomber unit at Upper Heyford equipped with Harts. Hinds were flown from April 1936 until Blenheim Is arrived in May 1939, which it took to France at the outbreak of WWII. The Squadron suffered heavy losses before returning to the UK in May 1940 where it regrouped and continued in the bombing of enemy targets in Europe. It moved to the Mediterranean in January 1942 but returned to the UK in May where it prepared for a permanent move to the North African front in November. The Blenheim Vs were exchanged for Boston IIIs in March 1943 and these were superseded by Mk IVs and Vs in July 1944. No. 18 moved through Sicily to Italy where it was engaged in bombing operations in the Balkans and attacking coastal shipping. In September 1945 the Squadron moved to Hassani in Greece where it disbanded on 31 March 1946. 18 Squadron briefly emerged in Palestine flying Lancaster GR3s from 1â€“15 September 1946, but reformed at Butterworth in Malaya on 15 March 1947 with Mosquito Met 6s for meteorological work. It disbanded again on 15 November 1947 only to reform in the transport role at Waterbeach on 8 December 1947, equipped with Dakota C4s. These were flown in the Berlin Airlift before disbanding again on 20 February 1950. The Squadron reverted to the bomber role when it reformed with Canberra B2s at Scampton on 1 August 1953 and moved to Upwood in May 1955 where it disbanded on 1 February 1958. As part of the V-bomber force, No. 18 Squadron appeared at Finningley equipped with Valiant B1s on 16 December 1958, but disbanded yet again on 31 March 1963. On 27 January 1964 the Wessex Trials Unit at Odiham became No. 18 Squadron to operate in the tactical helicopter support role providing transport for the Army. It relocated to GÃ¼tersloh in January 1965 and apart from a spell in the UK from January 1968 until August 1970, it has remained in Germany for 32 years. It disbanded with the Wessex in 1980, but re-equipped at GÃ¼tersloh with the Boeing-Vertol Chinook HC1 in 1981, the Squadron seeing service in the Falklands and Gulf campaigns using the versatile Chinook to its limits. In 1992 the Squadron added Puma HC1s to its strength and moved to Laarbruch in March 1993. It converted to Chinook HC2s in 1994 supporting operations in the former Republic of Yugoslavia and Northern Ireland. In January 1997 its Pumas moved to Northern Ireland to form a Flight on No. 72 Squadron and in June 1997 the Squadron returned once again to Odiham. In 2000, elements of the Squadron deployed as part of the Chinook Wing in support of operations in Sierra Leone, and again in 2001 in support of the War Against Terrorism in Afghanistan. The entire Squadron were then deployed on Operation Telic in 2003, initially operating from Kuwait and HMS Ark Royal. During the early hours of the war against Iraq, all the Squadronâ€™s Chinooks were used in securing the heavily defended Al Faw peninsular, a result of which saw the formation leader being awarded the Distinguished Flying Cross. The Squadron remained in Iraq until 2005. In early 2006, flights deployed to Afghanistan under the banner of 1310 Flight and completed multiple tours to the country over the coming years. The Squadron completed its final tour of Helmand Province in 2014, providing the last coalition aircraft and British personnel to leave Camp Bastion during its handover in October. The Squadron was then tasked to set up a new Afghanistan operation in Kabul under Op TORAL, eventually being replaced by 27 Squadron in December 2014. During the entirety of the Afghanistan campaign the Squadron was awarded eleven DFCs, one AFC and eight MIDs. In March 2015 18(B) Squadron celebrated 100 years since being formed, the event being attended by CAS, ACM Sir Andrew Pulford KCB CBE ADC RAF. With the completion of operations in Afghanistan the squadron received its own engineers and support staff enabling it to function as a fully formed unit for the first time in a decade, enhancing world wide deployments as part of Defenceâ€™s Contingency readiness.