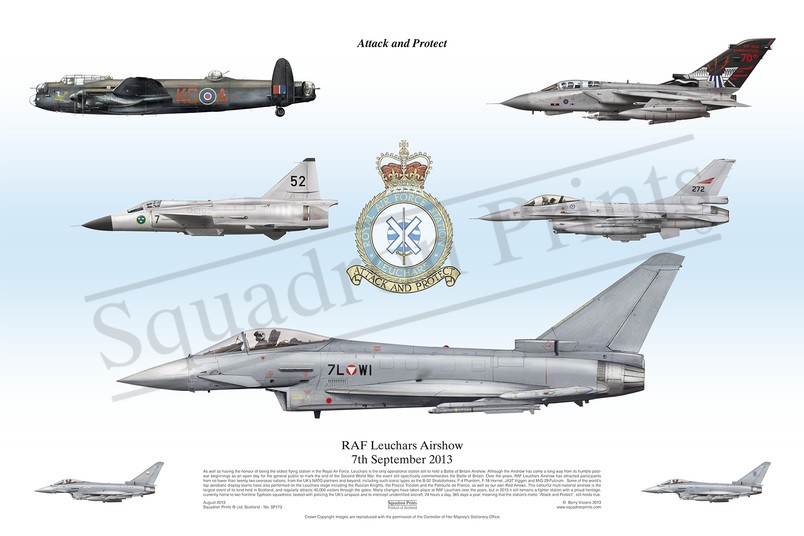 Squadron Prints Lithograph No. SP173 - RAF Leuchars Airshow, 7th September 2013. As well as having the honour of being the oldest flying station in the Royal Air Force, Leuchars is the only operational station still to hold a Battle of Britain Airshow. Although the Airshow has come a long way from its humble post-war beginnings as an open day for the general public to mark the end of the Second World War, the event still specifically commemorates the Battle of Britain. Over the years, RAF Leuchars Airshow has attracted participants from no fewer than twenty two overseas nations, from the UK’s NATO partners and beyond, including such iconic types as the B-52 Stratofortress, F-4 Phantom, F-18 Hornet, JA37 Viggen and MiG-29 Fulcrum. Some of the world’s top aerobatic display teams have also performed on the Leuchars stage including the Russian Knights, the Frecce Tricolori and the Patrouille de France, as well as our own Red Arrows. This colourful multi-national airshow is the largest event of its kind held in Scotland, and regularly attracts 40,000 visitors through the gates. Many changes have taken place at RAF Leuchars over the years, but in 2013 it still remains a fighter station with a proud heritage, currently home to two frontline Typhoon squadrons, tasked with policing the UK’s airspace and to intercept unidentified aircraft, 24 hours a day, 365 days a year, meaning that the station’s motto “Attack and Protect”, still holds true.