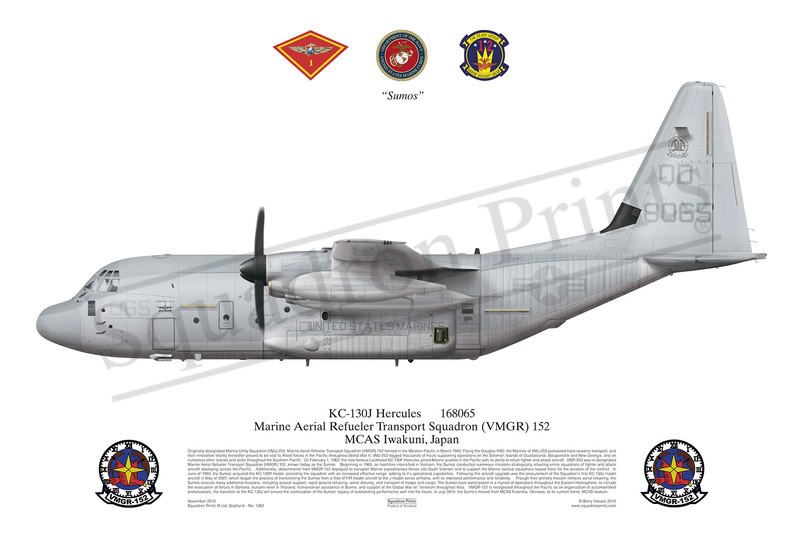 Squadron Prints Lithograph No. 1362 - 168065 'QD', KC-130J Hercules, Marine Aerial Refueler Transport Squadron (VMGR) 152, MCAS Iwakuni, Japan. Originally designated Marine Utility Squadron (VMJ) 253, Marine Aerial Refueler Transport Squadron (VMGR) 152 formed in the Western Pacific in March 1942. Flying the Douglas R4D, the Marines of VMJ-253 pioneered trans-oceanic transport, and their innovation shortly thereafter proved to be vital to Allied forces in the Pacific throughout World War II. VMJ-253 logged thousands of hours supporting operations on the Solomon Islands of Guadalcanal, Bougainville and New Georgia, and on numerous other islands and atolls throughout the Southern Pacific. On February 1, 1962, the now famous Lockheed KC-130F Hercules joined Marine aviation in the Pacific with its ability to refuel fighter and attack aircraft. VMR-253 was re-designated Marine Aerial Refueler Transport Squadron (VMGR) 152, known today as the Sumos. Beginning in 1965, as hostilities intensified in Vietnam, the Sumos conducted numerous missions strategically refueling entire squadrons of fighter and attack aircraft deploying across the Pacific. Additionally, detachments from VMGR-152 deployed to transport Marine expeditionary forces into South Vietnam and to support the Marine tactical squadrons based there for the duration of the conflict. In June of 1993, the Sumos acquired the KC-130R model, providing the squadron with an increased effective range, adding to it’s operational capabilities. Following this aircraft upgrade was the procurement of the Squadron’s first KC-130J model aircraft in May of 2007, which began the process of transitioning the Sumos from a fleet of F/R model aircraft to the J model series airframe, with its improved performance and reliability. Though their primary mission remains aerial refueling, the Sumos execute many additional missions, including assault support, rapid ground refueling, aerial delivery, and transport of troops and cargo. The Sumos have participated in a myriad of operations throughout the Eastern Hemisphere, to include the evacuation of forces in Somalia, tsunami relief in Thailand, humanitarian assistance in Burma, and support of the Global War on Terrorism throughout Asia. VMGR-152 is recognized throughout the Pacific as an organization of accomplished professionals; the transition to the KC-130J will ensure the continuation of the Sumos’ legacy of outstanding performance well into the future. In July 2014, the Sumo’s moved from MCAS Futenma, Okinawa, to its current home, MCAS Iwakuni.