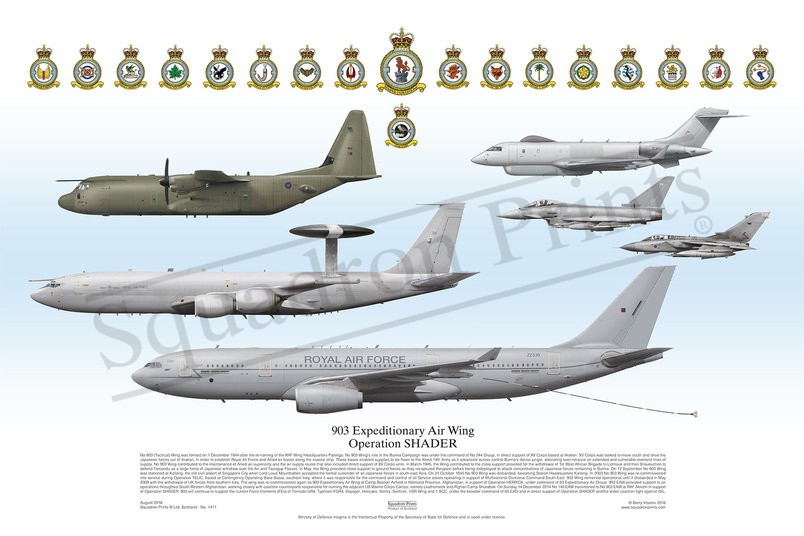 Squadron Prints Lithograph No. 1411 - 903 Expeditionary Air Wing, Operation SHADER. No 903 (Tactical) Wing was formed on 1 December 1944 after the re-naming of the RAF Wing Headquarters Patenga. No 903 Wing's role in the Burma Campaign was under the command of No 244 Group, in direct support of XV Corps based at Arakan. XV Corps was tasked to move south and drive the Japanese forces out of Arakan, in order to establish Royal Air Force and Allied air bases along the coastal strip. These bases enabled supplies to be flown to the Allied 14th Army as it advanced across central Burma's dense jungle, alleviating over-reliance on extended and vulnerable overland lines of supply. No 903 Wing contributed to the maintenance of Allied air superiority and the air supply routes that also included direct support of XV Corps units. In March 1945, the Wing contributed to the close support provided for the withdrawal of 1st West African Brigade to Letmauk and then Shaukuchon to defend Tamandu as a large force of Japanese withdrew over the An and Taungup Passes. In May, the Wing provided close support to ground forces as they recaptured Rangoon before being redeployed to attack concentrations of Japanese forces remaining in Burma. On 12 September No 903 Wing was stationed at Kallang, the old civil airport of Singapore City when Lord Louis Mountbatten accepted the formal surrender of all Japanese forces in south-east Asia. On 31 October 1945 No 903 Wing was disbanded, becoming Station Headquarters Kallang. In 2003 No 903 Wing was re-commissioned into service during Operation TELIC, based at Contingency Operating Base Basra, southern Iraq, where it was responsible for the command and control of all Service assets operating in support of Multinational Divisional Command South-East. 903 Wing remained operational until it disbanded in May 2009 with the withdrawal of UK forces from southern Iraq. The wing was re-commissioned again as 903 Expeditionary Air Wing at Camp Bastion Airfield in Helmand Province, Afghanistan, in support of Operation HERRICK, under command of 83 Expeditionary Air Group. 903 EAW provided support to air operations throughout South Western Afghanistan, working closely with coalition counterparts responsible for running the adjacent US Marine Corps Camps; namely Leatherneck and Afghan Camp Shorabak. On Sunday 14 December 2014 No 140 EAW transitioned to No 903 EAW at RAF Akrotiri in support of Operation SHADER. 903 will continue to support the current Force Elements (FEs) of Tornado GR4, Typhoon FGR4, Voyager, Hercules, Sentry, Sentinel, 1ISR Wing and 1 ACC, under the broader command of 83 EAG and in direct support of Operation SHADER and the wider coalition fight against ISIL.