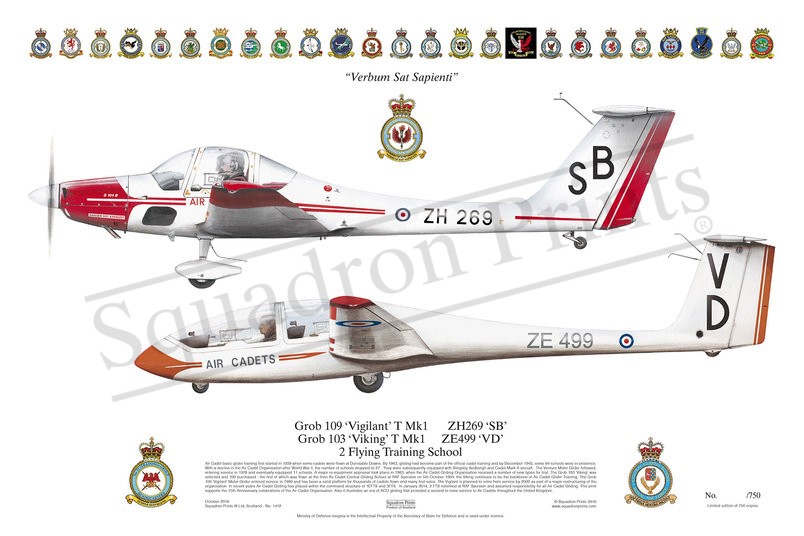 Squadron Prints Lithograph No. 1412 - ZH269 'SD', ZE499 'VD', Vigilant T1, Viking T1, 2 Flying Training School. Air Cadet basic glider training first started in 1939 when some cadets were flown at Dunstable Downs. By 1943, gliding had become part of the official cadet training and by December 1945, some 84 schools were in existence. With a decline in the Air Cadet Organisation after World War ll, the number of schools dropped to 27. They were subsequently equipped with Slingsby Sedbergh and Cadet Mark lll aircraft. The Venture Motor Glider followed, entering service in 1978 and eventually equipped 11 schools. A major re-equipment appraisal took place in 1983, when the Air Cadet Gliding Organisation received a number of new types for trial. The Grob 103 "Viking" was selected and 100 purchased - the first of which was flown at the then Air Cadet Central Gliding School at RAF Syerston on 5th October 1984; the Viking continues to be the backbone of Air Cadet Glider Training. The Grob 109 "Vigilant" Motor Glider entered service in 1990 and has been a solid platform for thousands of cadets flown and many first solos. The Vigilant is planned to retire from service by 2020 as part of a major restructuring of the organisation. In recent years Air Cadet Gliding has placed within the command structure of 1EFTS and 3FTS. In January 2014, 2 FTS reformed at RAF Syerston and assumed responsibility for all Air Cadet Gliding. This print supports the 75th Anniversary celebrations of the Air Cadet Organisation. Also it illustrates an era of ACO gliding that provided a second to none service to Air Cadets throughout the United Kingdom.