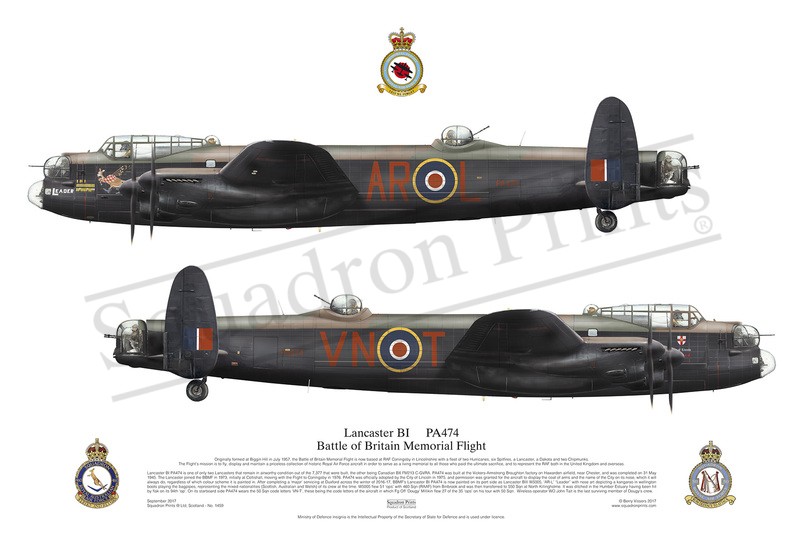 Squadron Prints Lithograph No. 1459 - Lancaster BI, PA474, Battle of Britain Memorial Flight. Originally formed at Biggin Hill in July 1957, the Battle of Britain Memorial Flight is now based at RAF Coningsby in Lincolnshire with a fleet of two Hurricanes, six Spitfires, a Lancaster, a Dakota and two Chipmunks. The Flight's mission is to fly, display and maintain a priceless collection of historic Royal Air Force aircraft in order to serve as a living memorial to all those who paid the ultimate sacrifice, and to represent the RAF both in the United Kingdom and overseas. Lancaster BI PA474 is one of only two Lancasters that remain in airworthy condition out of the 7,377 that were built, the other being Canadian BX FM213 C-GVRA. PA474 was built at the Vickers-Armstrong Broughton factory on Hawarden airfield, near Chester, and was completed on 31 May 1945. The Lancaster joined the BBMF in 1973, initially at Coltishall, moving with the Flight to Coningsby in 1976. PA474 was officially adopted by the City of Lincoln in 1975, and permission was granted for the aircraft to display the coat of arms and the name of the City on its nose, which it will always do, regardless of which colour scheme it is painted in. After completing a 'major' servicing at Duxford across the winter of 2016-17, BBMF's Lancaster BI PA474 is now painted on its port side as Lancaster BIII W5005, 'AR-L' "Leader" with nose art depicting a kangaroo in wellington boots playing the bagpipes, representing the mixed nationalities (Scottish, Australian and Welsh) of its crew at the time. W5005 flew 51 'ops' with 460 Sqn (RAAF) from Binbrook and was then transferred to 550 Sqn at North Killingholme. It was ditched in the Humber Estuary having been hit by flak on its 94th 'op'. On its starboard side PA474 wears the 50 Sqn code letters 'VN-T', these being the code letters of the aircraft in which Fg Off 'Dougy' Millikin flew 27 of the 35 'ops' on his tour with 50 Sqn. Wireless operator WO John Tait is the last surviving member of Dougy's crew.